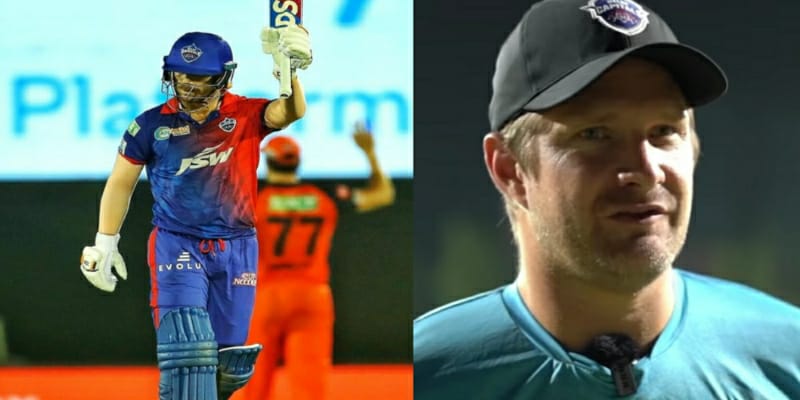 David Warner led the Sunrisers Hyderabad to their first IPL trophy in the year 2016. Not only with his captaincy also with his bat. Warner contributed significantly with the bat in the playoffs of IPL 2016. But suddenly last year, he was first removed as captain of the team and then even dropped from the squad and the franchise also decided not to retain him before the Mega auction of IPL 2022.

On Thursday, Warner scored 92 runs off 58 balls against his former side to set a mammoth target of 208 in 20 overs to chase. Eventually SRH fall short by 21 runs while chasing. David Warner was declared as the Man of the Match.

After his match winning performance, DC assistant coach Shane Watson caught up with his Australian mate and spoke to him about facing his former side. Warner said, “Yeah look, I didn’t need extra motivation that’s for sure”. He further added Rishabh Pant’s smashing 23 run of Shreyas Gopal was the turning point of DC innings.

Waner told, after losing the toss it was their responsibility to get to a good start with the bat in the powerplay. He told if someone scores 80 and another one with 40 then we will win lot of games. He also added it was fantastic to be batting with Rovman Powell. Warner also got great support from Powell who smashed 67 runs of 35 balls.

During the chase the SRH batsman struggled to make a partnership and, in the end, they only managed 186 runs in their 20 overs, giving DC their 5th win in this season.

“Arjun is one of them” – Mumbai Indians Head Coach Mahela Jayawardene reveals why Arjun Tendulkar has not played yet in IPL 2022
Tristan Stubbs: Who is the new recruit of the Mumbai Indians for IPL 2022 ?
To Top