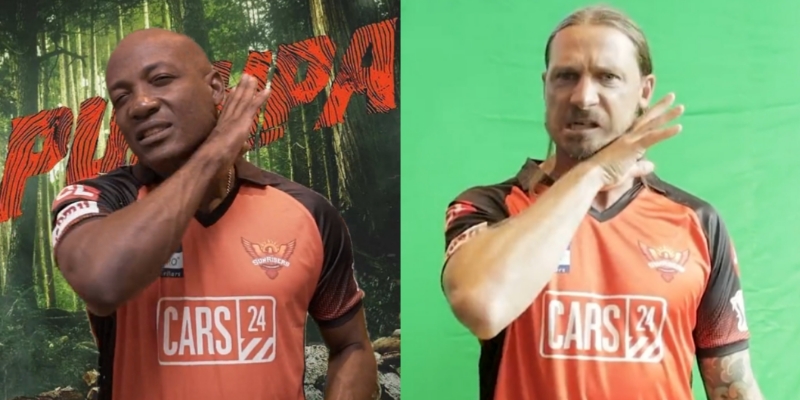 In two days’ time, the greatest T20 tournament in history is about to start. And the first clash of the Indian Premier League will take place on Saturday, March 26. All ten franchises are gearing up for the mega event. But it’s not about preparing on the field. Teams are also doing some interesting stuff off the field to engage as many fans as possible in the game. The 2016 IPL winners, SRH, shared a behind-the-scenes video featuring their skipper, players, and coaching staff including Lara and Dale Steyn. It was the pre-season photo-shoot video for the teams ahead of the upcoming season.

The franchise posted a video on their official Twitter handle. It had their bowling and batting coaches, Dale Steyn and Brain Lara, imitating the “Pushpa” move and Williamson showing off his dancing moves. The video also featured the head coach, Tom Moody, pacer Bhuvneshwar Kumar, T Natarajan, Rahul Tripathi, Shreyas Gopal, and some other players as well.

Brain Lara and Dale Steyn pulling off the “Pushpa” move

However, it was not just the players that showed their lighter sides, but the coaches were also up to it. Head coach Tom Moody, batting coach Brain Lara, and the latest addition to the coaching department, as bowling coach, Dale Steyn, also made a small cameo in the video.

Sunrisers Hyderbad will enter the tournament with the hope of making it a big one. The franchise had the worst tournament last season, where they finished at the bottom of the league, winning just three matches out of 14. Kane Williamson will have a big role to play. SRH are placed in Group B along with CSK, RCB, PBKS, and Gujarat Titans.

The Orange Army will kick off their campaign against the Rajasthan Royals on Tuesday, March 29 at MCA Stadium. Mumbai