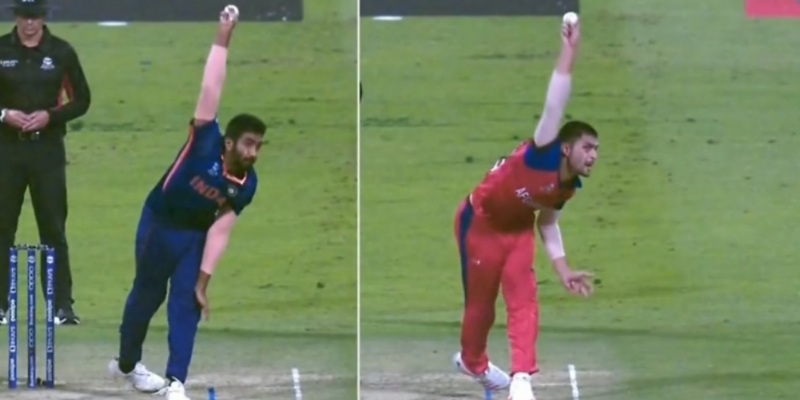 Afghanistan pace bowler Naveen-ul-Haq played for his country in the ICC T20 World Cup 2021. Since the tournament had a lot of following, quite a few fans noticed Naveen for the first time. The 22-year-old pace bowler played for the Afghanistan cricket team in all five matches of the Super 12 round. Many cricket experts noted that Naveen had a bowling action almost similar to Indian fast bowler Jasprit Bumrah.

Recently, in an interview with News9 Live, Naveen-ul-Haq opened up on the comparison with Jasprit Bumrah and here’s what he had to say:

“Even I didn’t know I had a similar bowling action to Jasprit Bumrah. Before this T20 World Cup, no one had pointed this out. You know the similar load-up or the hyperextension. It was during the match that I saw it on the big screen that our bowling action was being compared and I was like ‘wow!’, there is indeed some similarity. After that match, people started to ask me about it. I feel the bowling action comes naturally. But the similarity is completely a coincidence.”

You can watch that video right here:

Naveen-ul-Haq has played for Guyana Amazon Warriors in the Caribbean Premier League, Sylhet Thunder in the Bangladesh Premier League, Kandy Tuskers in the Lanka Premier League and Leicestershire in county cricket. The right-arm pacer will be an important player for the Afghanistan cricket team in the upcoming years.