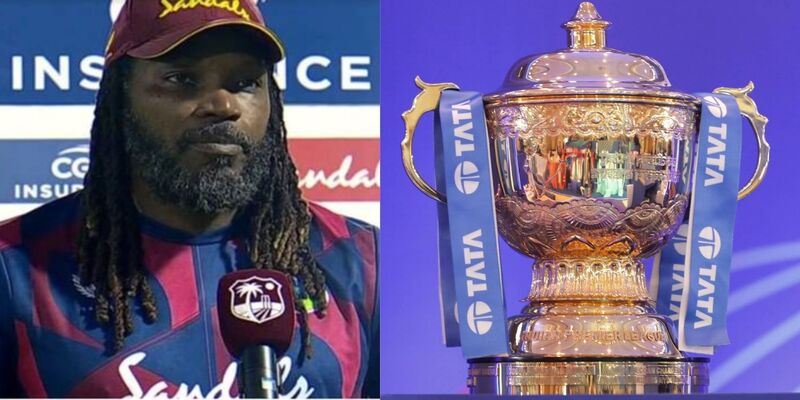 The marquee league is about to start within the span of a few weeks. And with two more teams added this season, there will be more excitement and action for the fans. The Indian Premier League will kick off on March 26 with a total of 70 league games. Ten teams are divided into two groups of five. All the league matches will be played in four venues in Mumbai and Pune. Furthermore, after the auction, all of the teams appear to be capable of winning the trophy. And fans are also excited for their favourite team to win the title. However, West Indies opener Chris Gayle has revealed his favourite teams, whom he will be supporting this season.

Gayle, who is known for his big sixes and destructive knocks, is not a part of this season. But he had given the names of his two favourite teams, which he wanted to lift the trophy.

The Jamaican superstar was part of the IPL till 2021 but has not registered himself for this season. Chris Gayle has represented three franchises in his IPL career of 12 seasons. He made his debut with the Kolkata Knight Riders. Then he joined Kohli’s RCB and was an important member of the team. And he played for Kings Xi Punjab (now Punjab Kings) till 2021.

And during a Q & A interaction on Instagram, a fan asked him about his favourite IPL team. The left-hander was quick to respond to that. Gayle expressed that he wants one of RCB or PBKS to lift the trophy this season and will support both the teams.

Both teams had a good IPL 2022 auction and it will be interesting to see how they perform. Both the franchises are yet to announce their captain, but they have got some of the best international stars in their ranks.

However, Gayle, who has not registered for this year, will certainly be missed by the fans. He has been a phenomenal performer in the IPL and there is no doubt that he is an IPL legend.

“The guy loves the PSL” – Niall O’Brien thanks Islamabad United and Ireland for making it possible for Paul Stirling return to PSL 2022
Jason Roy pulls out of IPL 2022, Gujarat Titans to announce replacement soon
To Top