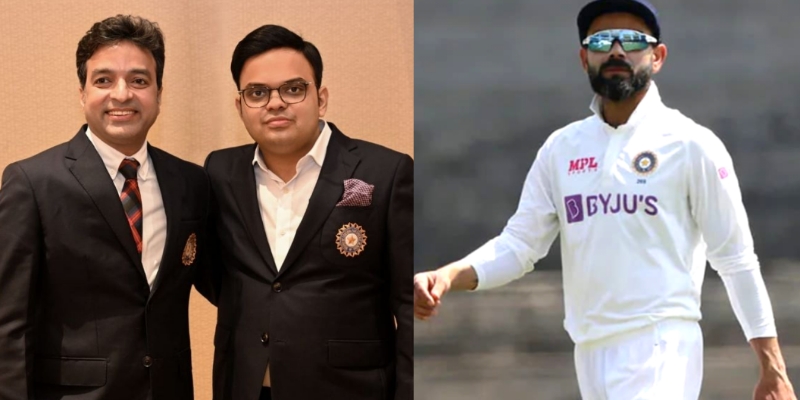 Former Indian captain Virat Kohli shocked everyone and announced his decision to quit Indian Test team’s captaincy after the defeat to South Africa earlier this year. And now, BCCI treasurer Arun Dhumal has shed some light on this.

Virat Kohli is considered among some of the most successful Indian captain ever, even though he failed to win any ICC Trophy under his captaincy, he still maintained a great ratio of win percentage.

But, since the Day and Night Test match against Bangladesh, Virat Kohli has not been the same again. The batting sensation has not been able to deliver at the level he is capable too. Once touted as the only likely option to equal or surpass Sachin Tendulkar’s 100 International Hundred record, has not scored a single century after that Bangladesh match.

He decided to step down from the captaincy role of both the Royal Challengers Bangalore (RCB) in IPL and the Indian T20 team. He was later even relinquished from his role as ODI team captain as well as the selectors didn’t different captains for limited overs series.

Then he made a shocking announcement announcing his decision to step down as the Test captain after the South Africa Test series defeat earlier this year. However, things hasn’t changed a bit.

After his decision to step down as Test captain, there were huge number of reports stating of rift between Kohli and the BCCI. Now, BCCI treasurer Mr. Arun Dhumal has presented his views on this and made a big revelation.

Talking to journalist Vimal Kumar on his YouTube channel, Dhumal revealed that it was Virat Kohli’s own decision to step down as India captain. “As far as the issue of captaincy is concerned, it was his call. He decided that mujhe ab nahi karni hai captaincy,” he said.

He further added that everyone in the BCCI respected Kohli’s decision and admires his contribution to the Indian team.