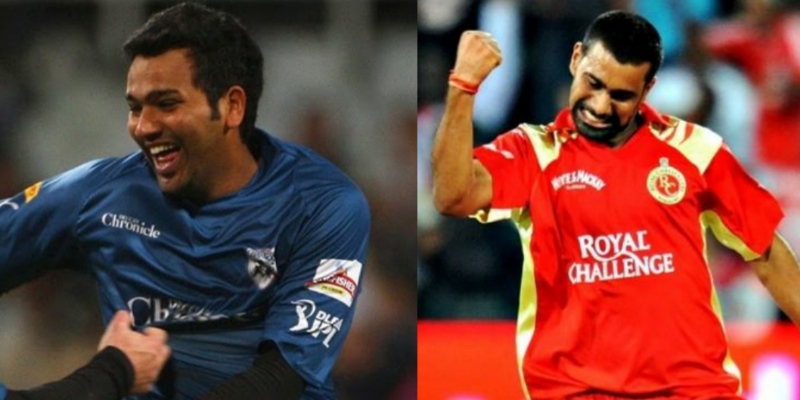 So far, in the history of IPL, we have seen 20 instances of a hat-trick being taken. Harshal Patel is the latest entrant to this list. In the recent game against Mumbai Indians, the Haryana cricketer achieved the feat. In this article, we take a look at a strong balanced playing XI of cricketers who have taken a hat-trick in IPL history so far.

A hat-trick is a fairly difficult achievement. In T20 cricket, with batsmen trying to go at the bowler, a hat-trick might be possible but usually, the batters remain careful not to concede their wicket on the hat-trick delivery.

Note: No specialist wicket-keeper has picked a hat-trick in IPL. When Adam Gilchrist picked a wicket in his final IPL game, it was Praveen Kumar who had kept wickets for Punjab Kings.

While Rohit Sharma owns plenty of batting and captaincy records, not many remember that he also belongs to a rare list of cricketers who have got a hat-trick in IPL. Back in 2009, when Rohit was playing for Deccan Chargers, he achieved the feat. Incidentally, he did that against Mumbai Indians, which is his current franchise. Abhishek Nayar, Harbhajan Singh and JP Duminy were the hat-trick wickets.

Sunil Narine started out as a pure spinner but over the years, he has developed his batting skills, as well. For quite a few years, he played as an opener for KKR. In 2013, the West Indian player picked up a hat-trick against Punjab.

A hat-trick is a feat that is usually achieved by a bowler. Hence, naturally, in a balanced XI, the batting line-up ought to be thin. In IPL, though, few batsmen and all-rounders have also achieved the feat. Hence, the batting department does look decently strong.

Yuvraj Singh did it not once but twice. He did it both in the same edition in 2009. The first time, it was against RCB and then, when playing against Deccan Chargers. The southpaw will bat at No.3 for this XI. Although he is known as an opener, it was in the middle-order that Shane Watson did well initially. Hence, the 2014 hat-trick wicket-taker plays at No.4.

Axar Patel and Sam Curran will form the core of the all-rounders’ department. While Axar entered this list in 2016, Sam Curran joined it in 2019. Both the cricketers did it while playing for Punjab Kings.

Harshal Patel is the recent entrant to this list. He achieved the record against Mumbai Indians in UAE. Harshal’s wickets included Kieron Pollard, Hardik Pandya and Rahul Chahar. His performance also helped RCB win the game.

Shreyas Gopal is an all-rounder in the domestic circuit but plays in IPL only as a spinner. Since this XI needs batting depth, we have the Karnataka cricketer in the line-up. Gopal got the wickets of Virat Kohli, AB de Villiers and Marcus Stoinis in his hat-trick. In the spin department, we have Amit Mishra, who achieved the feat three times in his IPL career. He did it in 2008, 2011 and 2013.

The pace department will revolve around Andrew Tye and Praveen Kumar. Both are decent with the bat and will therefore add depth to the batting order. Praveen and Tye have also done well for their respective teams in IPL.