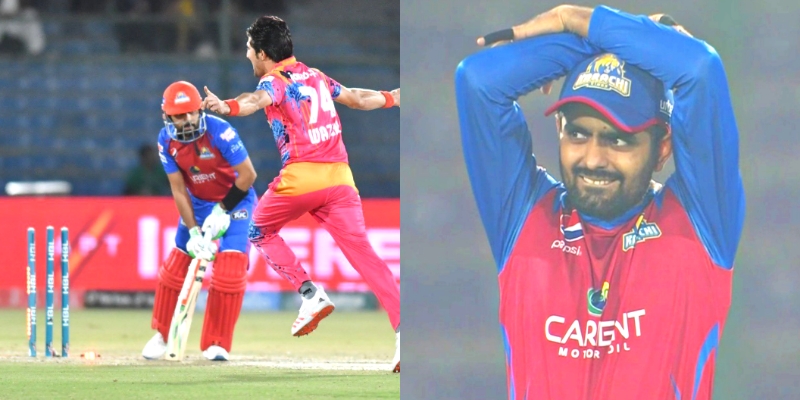 Babar Azam led Karachi Kings slump to their 5th straight defeat in the ongoing Pakistan Super League (PSL) 2022 edition as Islamabad United got the better of the Karachi based team.

At one hand when Multan Sultans, led by Mohammad Rizwan, is flying high in the PSL 2022 points table with 5 wins from 5 matches, Babar Azam’s team having a complete different story.

Winning the toss, Islamabad United opted to bat first as opening duo of Alex Hales and Paul Stirling gave the away side a flying start before Hales was dismissed for 30 runs off 21 balls in the 8th over of the match.

His opening duo Paul Stirling was soon dismissed too for an individual score of 39 runs. Colin Munro then added 33 runs, while skipper Shadab Khan played a cameo of 34 runs of 19 balls, taking Islamabad United’s score to 177 for the loss of 6 wickets in their respective 20 overs.

In chase of the target, Karachi Kings lost 9 wickets for 135 runs in their respective 20 overs. Opening the inning, Sharjeel Khan and Babar Azam got off to a really bad start as both were dismissed inside the powerplay.

Followed them soon after was Ian Cockbain and Sahibzada Farhan in the next 2 overs. Lewis Gregory and Imad Wasim went back to pavilion in the same over, in the 12th over of the inning.

Chris Jordan, Mohammad Taha and Umaid Asif was the other three players of Karachi to be dismissed as the leg-spin bowler and captain Shadab Khan bagged 4 wickets and Man of the Match to hand his team a 42 runs win over the hosts.

With this win, Islamabad United finds themselves 2nd in the Pakistan Super League (PSL) 2022 points table, while Babar Azam’s Karachi Kings continue to be at the bottom of the league table.

Here’s why Team India sporting black armband in the first ODI vs West Indies
“What is your weakness ?” – Ravi Kumar receives hilarious reply from Virat Kohli after asking him his weakness
To Top