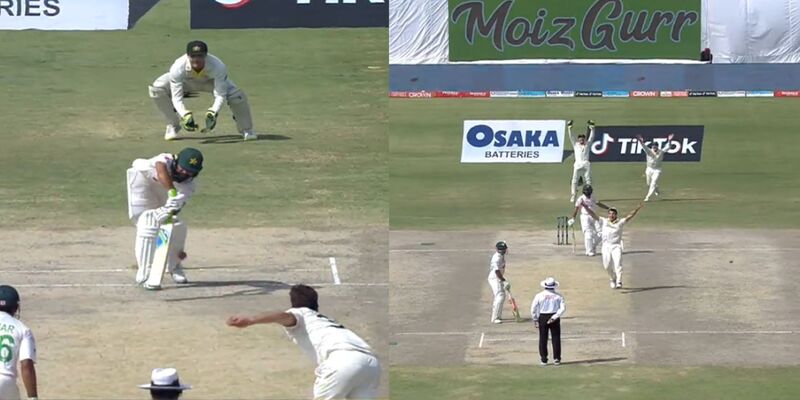 And finally, the match and Test series have ended. But this time, not with a draw. The visiting team beat Pakistan by 115 runs in the third and final Test of the series on Day 5. And with that, they have also won the series 1-0. It was a thrilling day of cricket, with both teams having the chance to win the match at the start. But ultimately, it was the No. 1 ranked team, Australia and Pat Cummins, who held their nerve and won the match.

The pitch at the Gaddafi Stadium in Lahore was again a flat track, with very little assistance for the bowlers. But it was the special efforts of the Australian team that bowled out Pakistan twice in the match. In the first innings, Pat Cummins was the star with the bowl. He took 5/56. And in the second innings, it was veteran spinner Nathan Lyon who took a fifer to bundle out the home team. Lyon took 5/83 in the second innings. The Australian skipper was also among the wickets in the second innings as well. Cummins took three wickets, including the all-important wickets of Fawad Alam and Mohammad Rizwan. The ball he bowled to Fawad was a peach of a delivery to dismiss the left-hander.

However, Fawad asked for a review, but it showed on the big screen that there was no bat involved and the ball was heading towards the middle and leg stumps.

With this win, Australia has maintained their top position in the WTC table with 72 points and five wins. However, Pakistan, which was sitting on the third spot, has gone to the fourth spot and India has moved up to third. Pakistan now has a 52.38 win percentage and India has a 58.33.

Both teams will lock horns in a white-ball format now, where they will play three ODIs and one T20I. The first ODI will be played on March 29 at the same venue. Gaddafi Stadium in Lahore will host all the white-ball games.

Watch: Batsman surprises fielding team by changing from left-hander to right-hander
Watch: Mitchell Swepson celebrates in Shaheen Afridi style after taking his catch in the 3rd Test
To Top