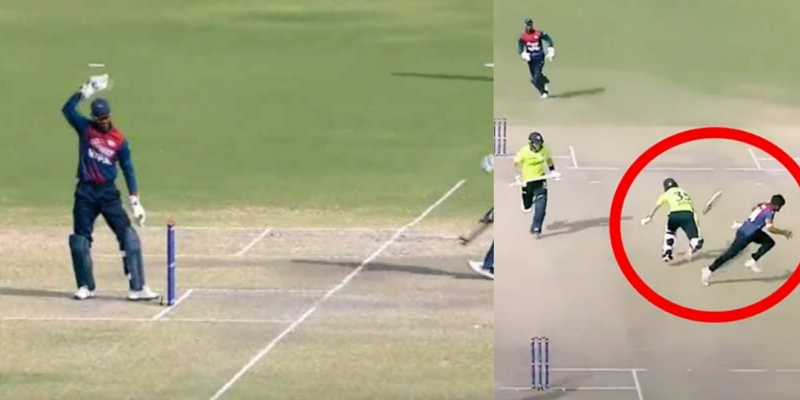 Nepal cricket team wicketkeeper Aasif Sheikh showcased the Spirit of Cricket as he denied a good opportunity to run out Ireland’s Andy McBrine as the batsman was accidentally tripped by the bowler.

Ireland and Nepal faced off in the 6th match of the Oman Quadrangular T20I series, which also features Oman and UAE, being played in Oman’s Al Amerat Cricket Stadium.

Ireland and Nepal played the last match of the series on the 14th of February, which Ireland won by 16 runs after showing great performance with the ball, successfully defending 128 runs target as Nepal could only score 111 runs from their respective 20 overs.

But a moment from the match that the fans, especially the Nepal fans, will cherish forever is when Nepal’s wicketkeeper Aasif Sheikh denied the clear opportunity to run out Andy McBrine as he was accidentally tripped by the bowler.

Aasif Sheikh’s decision has been praised by many, including the on air commentators. Even the batsman Andy McBrine had a small chat with the wicketkeeper following that, thanking him for showcasing the Spirit of the Game.

This is brilliant from Nepal wicket-keeper Aasif Sheikh – spirit of cricket moment. pic.twitter.com/704Q85B3gN

Talking more about the match, Ireland posted 127 runs on the board after was asked to bat first by the Nepal side.

For Ireland, George Dockrell was the highest run scorer for them in the match, who scored 28 runs. For Nepal, Dipendra Singh Airee was fantastic with the ball as he picked up 4 wickets in the match.

However, chasing 128 runs, Nepal batsmen failed to contribute much. Once again Dipendra Singh Airee was the highest run scorer for Nepal as he scored 28 runs, but the other batsmen just couldn’t contribute much.

Even though Ireland won the match against Nepal, it was the United Arab Emirates (UAE) cricket team, who won the series, even though suffering a defeat to Oman in the their last match, but they finished ahead of Nepal on Net Run Rate (NRR).