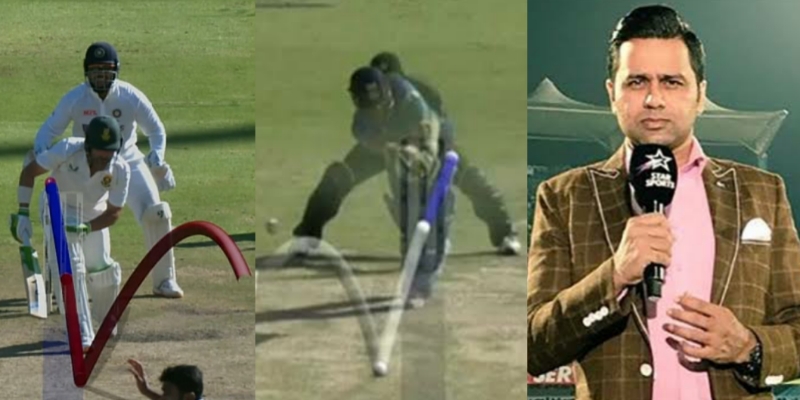 An antagonistic DRS choice prompted a major clamor on Day 3 of the continuous third Test match between hosts South Africa and India.

South Africa’s skipper Dean Elgar got an immense reprieve in the 21st over of South Africa’s second inning when the left-hand batsman was decreed as LBW out by on-field umpire Marais Erasmus.

However, on further investigation by the third umpire, it was revealed that the ball was going over the stumps which wasn’t generally welcomed by Virat Kohli and the Indian team in all.

What followed was a searing response by the opposition team, who went up to the stump-mic and let out their disappointment over third umpires choice and the broadcasters’ footage.

Joining on air talking about the same on Star Sports, the commentator and former cricketer Aakash Chopra contrasted it with an occurrence in the 2011 ODI World Cup when Sachin Tendulkar got a comparable reprieve to the South African captain.

Chopra additionally added that Team India didn’t say anything negative with regards to the disputable choice in 2011 and “took it in the stride”.

Chopra said that he remember the 2011 ODI World Cup Semi-Final match between India and Pakistan, when Sachin Tendulkar was called out of Saeed Ajmal’s bowling, but the third umpires the turned the decision in favour of India, and the Indian team didn’t complain about that and took it in a stride.

The 44-year-old proceeded to clarify that even Dean Elgar looked shocked by the third umpire’s choice as even he was preparing to leave for the pavilion during the process.

He said that he was bewildered seeing how the ball missed the stumps and saw the same facial expression on South Africa’s captain Dean Elgar’s face, who was walking back to the pavilion.

It turned out to be the most controversial thing to have happened in the recent history of cricket. Even though Dean Elgar survived there, he was eventually dismissed by Jasprit Bumrah a couple of overs later.

South Africa are in a very comfortable position at the end of Day 3’s play and look all set to win the match and the series. The Proteas now require only 111 runs after ending Day 3 for the score of 102 runs, whereas, India needs to take 8 wickets, with 2 days of play still left, it is set to be a uphill task for Team India.

Fan reminded Dale Steyn of “Learn to take it kid” comment after Bumrah-Jansen incident; Steyn responds
“The Best Batter In 2021”, Boria Majumdar Picks A Surprising Option for India’s No.3 Spot In Tests
To Top