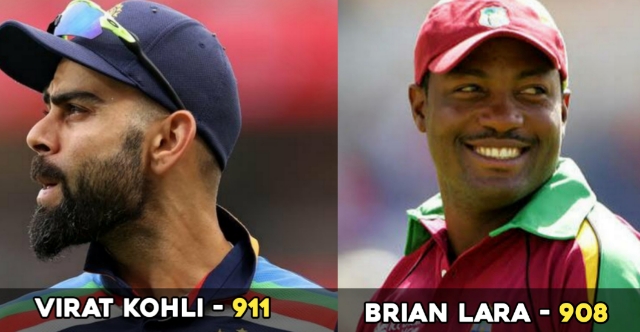 AB de Villiers was one of the best batters for the South African cricket team. Unfortunately, the right-handed batsman decided to quit international cricket in 2018.

He teased coming back recently, but now he has confirmed that he will not return. In March 2015, de Villiers had attained 902 rating points.

West Indian legend Brian Lara holds the eighth rank in this all-time list. The left-handed batsman was the backbone of the West Indies cricket team.

Recently, Lara was in action, playing for the West Indies Legends in Road Safety World Series. Lara attained 908 points after a game against Pakistan in March 1993.

Pakistani legend Javed Miandad achieved much success in the 50-over format of the game. He once held the 1st position in the ICC ODI Rankings.

Miandad is one of the only two Pakistani players to have breached the 900 rating points mark. In October 1987, he attained 910 points after a match against Sri Lanka.

Virat Kohli is one of the greatest batsmen in cricket history. The right-handed batsman is currently the captain of Team India in all formats of the game.

Kohli has broken several records in ODI cricket. After a match against England in July 2018, the Delhi-based player attained 911 rating points on the rankings.

Two Australian batters managed to accomplish this feat of 900+ rating points. One of them was Dean Jones, who played ODI cricket from 1984 to 1994.

In the year 1991, Jones attained his best rating of 918 points. He achieved this feat after an ODI match against the West Indies cricket team on March 9.

David Gower was one of the first batters to cross the 900 rating points mark on the ICC ODI Rankings for Batsmen. Gower played cricket for England.

Among all English batters, he has the highest rating points. Back in June 1983, David Gower attained 919 rating points after a match against New Zealand.

Greg Chappell holds the all-time record for the most rating points by an Australian batter. Chappell played ODI cricket for his country from 1971 to 1983.

During his career, Chappell once grabbed the top position on the ICC ODI Rankings. In February 1981, he had 921 rating points to his name after a match against the Kiwis.

Pakistan’s Zaheer Abbas owns the record for the highest rating points by an Asian in ICC ODI Rankings for Batsmen. Abbas played ODIs from 1974 to 1985.

In 1983, he achieved the first position on the rankings. Soon after that, Zaheer breached the 930 rating points landmark by attaining 931 points.

Vivian Richards is at the helm of this all-time list. The Caribbean legend once attained 935 rating points on the ICC ODI Rankings for Batsmen.

Richards created this world record after an ODI against Pakistan in 1985. It will be interesting to see if anyone can break Richards’ all-time record.