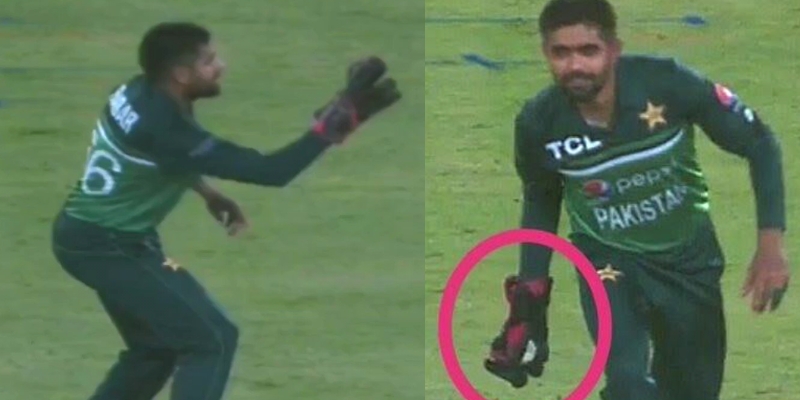 From the recently concluded Pakistan vs West Indies series, the 2nd ODI match between them will be remembered for an incident that probably happened for the first time in international cricket.

In the 29th over of the West Indies inning, Babar Azam wore a wicketkeeping glove from Mohammad Rizwan and used it to catch a throw behind the stumps. Cricket laws do not allow any fielder to use the gloves of the wicketkeeper, so Pakistan team was punished with 5 penalty runs for this ‘wrong fielding’.

Babar is an international cricketer and it can be said that it is not that he was not aware of the law about this. Just made a mistake even then, but he is not the first cricketer to be responsible for a penalty of 5 runs on his team due to such a strange mistake.

Australian opener Matt Renshaw did what Babar did while playing for Queensland against Western Australia in the Sheffield Shield at the Gabba. It happened that Queensland wicketkeeper Jimmy Peirson threw his gloves on the ground and ran towards square leg to catch the ball.

Fielding at first slip, Renshaw picked up Peirson’s glove and used it to collect the throw from the wicketkeeper. He felt that he was performing the duties of a wicketkeeper by standing in the place of the wicketkeeper. The umpires fined his team 5 runs for wrong fielding.

Leicestershire because of throw targetted towards the batter

In 2020, Leicestershire bowler Dieter Klein tried to run out the batsman with a throw in a County Championship match, on which Lancashire got 5 penalty runs. What happened was that Danny Lamb played a full length ball from Klein towards him and the bowler threw the ball back targeting the batsman and not the stumps. The throw was so fast that the batsman missed the bat after being hit by the ball and he himself jumped and survived.

Australia for players walking on the pitch

In Australia’s second inning against New Zealand in a Test match played in 2020, Labuschagne was warned by the umpire to walk on the ‘safe’ part of the pitch on the fourth ball of the 50th over. Two balls later, Warner made the same mistake, as because of which, the Australian team was fined 5 runs by umpire Aleem Dar.

Hobart Hurricanes because of Tim David

In a Big Bash League 2021 match between Hobart Hurricane and Melbourne Stars, Hobart Hurricanes were fined with a 5 runs after their batsman Tim David tried for a short run, but the umpire on the spot seen and thought it is intentional and thus Hobart were given 5 runs penalty.

4 international team captains who have stepped down in 2021
Cricket West Indies launches new T10 league with over the top rules; fully explained
To Top