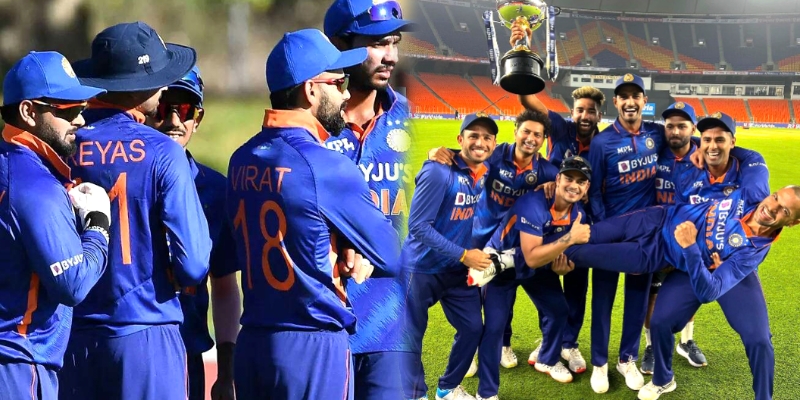 The 5 match T20 International series between India and South Africa has reached its concluding stage as both the tie-up in what will be a cracking series decider with both teams having 2 wins beside their name.

The Indian team got off to a worst possible start in the T20I series against South Africa, losing 2 matches on the trot. With senior players, such as captain Rohit Sharma and Virat Kohli and Jasprit Bumrah rested for the series.

India got off a worst possible start in the series, losing the first T20I in Delhi despite posting 211 runs on the board. In the next match, an individual brilliance from Heinrich Klaasen guided the Proteas to their 2nd win in the series.

But, India have made a strong comeback, winning the next 2 matches in Vishakhapatnam and Rajkot, setting up a cracking series decider in Bengaluru. But, this is not the only time that India has comeback to fought for series victory. Here are the four instances when India won the series from a losing position.

The first series in this list is when India and Sri Lanka took on for 3 matches. But, it was not a fruitful start for India, losing the first match, but then, they made a strong comeback to win the next 2 matches to win the series 2-1.

In 2016, Team India travelled to Zimbabwe with a 2nd string team for a 3 match T20I series. However, it was the repeat of the Sri Lanka series when they lost the first match and then go on to win the next 2 matches to win the series 2-1.

In 2018, when Team India travelled to South Africa, where India’s performance has not been upto the mark, they had to face a tough challenge from the Proteas. After winning the first, Team India lost the 2nd match, taking it to the decider, which eventually Team India won.

Probably the most toughest challenge that Team India has ever faced in a T20I series was in 2021, when India took on the England team. The series was a thriller, with England winning the 2 of the first 3 matches, India needed to win the last two matches to win the series, which eventually India managed to do, making a wholesome comeback to win 3-2 from being 2-1 down.