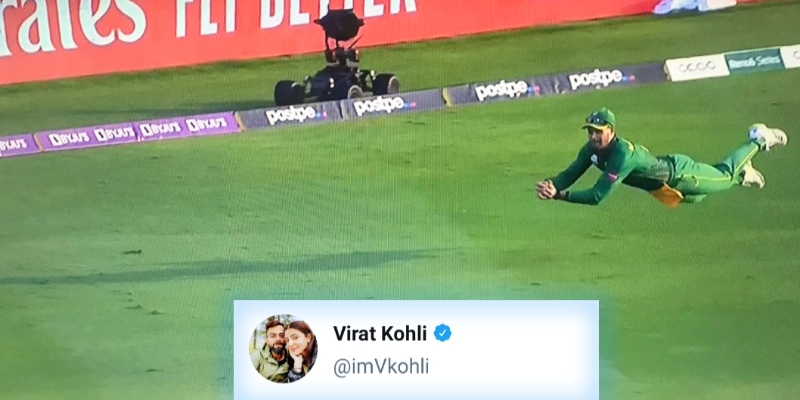 Australia defeated South Africa by five wickets in Game 1 of the Super 12 stages of the 2021 T20 World Cup. This game included a stunning catch by Aiden Markram, that soon became a talking point. In this article, we take a look at the 3-year-old Tweet of Virat Kohli that has gone viral after Aiden Markram’s flying catch against Australia.

In the first innings, South Africa lost a few early wickets and was hence, rocked back early. Although wickets kept falling at the other end, Aiden Markram was steady at the crease. He made 40 runs from 36 deliveries and helped his team post a score of 118 runs.

When Australia turned up, although they were off to a decent start, they were quickly put under pressure after a few wickets fell. Steve Smith was batting well and it took a flying catch by Markram to dismiss him. Anrich Nortje was the bowler and Markram took a sprint to his right and then completed the catch with ease. He was balanced and his head looked steady throughout. He managed to change the game at that point in time.

With clips of Markram’s catch going viral, many were amazed at the effort by the player. An old Tweet of Virat Kohli, posted in 2018, also went viral alongside many other appreciations for South Africa.

In 2018, the player was an influential part of the team that helped his team beat Australia in a Test match. South Africa won that match by 492 runs and it was Markram’s innings of 152 in the first innings that set up the game for them. Virat took reference to this and had appreciated the player back then. The same tweet has gone viral today after the effort on the field.

“After approaching MS Dhoni, Pant got dropped from Playing 11” – Twitter reacts to reports that Rishabh Pant and Hardik Pandya approached MS Dhoni to get advice to improve their T20 game