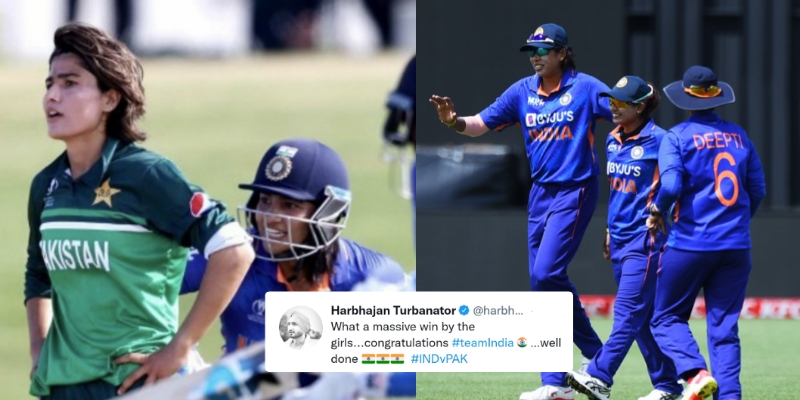 At 114/6 in the first innings for the Indian women, the concern of their first ever defeat in the Women’s ODI World Cup was on everyone’s face. But the stats suggest that India had won 10 matches prior to this one against Pakistan in the World Cup. And that’s what the result was in the end. India’s women won their first encounter against arch rival Pakistan by a massive 107 runs.

Indian lower order proved that the Women in Blue are capable of winning the match from any position. Sneh Rana and Pooja Vastrakar put on a big partnership for the seventh wicket to help the team post a challenging total of 244/7 in their 50 overs. Both batters scored their half-centuries, respectively, in this process. Rana made a quick unbeaten 53* off 48 balls, including four boundaries. And Pooja scored 67 runs off 58 balls, with eight fours in his inning.

Chasing the target, the Women in Green didn’t look comfortable from the start. Indian bowlers didn’t allow them to score runs at all in the power play overs, which put pressure on the Pakistani women. And they kept on losing wickets at regular intervals. At the end, they were bowled out for 137 runs in their 43 overs. And eventually, India won it comfortably by 107 runs.

With this victory, India has maintained their ICC Women’s World Cup record against Pakistan’s women. Indian women have won 11 out of 11 against the Women in Green. And after this win, Twitter was flooded with praise from the fans, and as a result, we have gathered such tweets for you.

Well played India,Pak lacked intent right from the start and never looked on course to chase this one,expect better from the batters. #IndVsPak